Saving energy is an important issue in the future. As a new type of green lighting source, LED is bound to be the future development trend. However, in the LED development process, the lighting designer lacks understanding of a series of psychological, physiological and other effects of various color light effects on human vision, resulting in problems in photobiosafety.

Nowadays, most white LEDs for illumination use blue light chips, which directly emit blue light. After blue light is excited by YAG yellow phosphor, part of it is converted into yellow light, and white light is synthesized together with blue light. Unlike the white light synthesized by the three primary color phosphors, the same correlated color temperature and color coordinates, the LED emits much more blue light than the three primary color fluorescent lamps. First, let's take a look at the output spectrum of the LED. 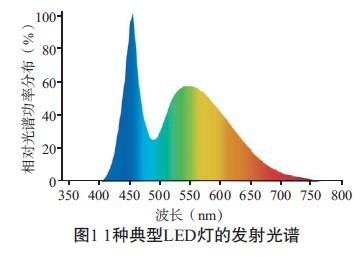 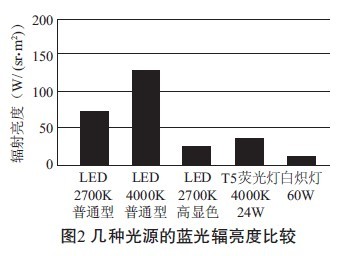 It can be seen from the spectrum of white light emitted by ordinary LEDs that the outstanding problem of white light output by this method is that LED has a halo effect and is not popular in some cases. This is due to the directional light emitted by the LED, converted by the yellow phosphor, and the Lambertian behavior, which is the spatial uniformity of the white LED space (Figure 3). The blue light emitted from the normal direction is the strongest and the least absorbed by the powder. From the current measurement method, when we measure the LED light source, the color rendering index obtained is only the average color rendering index of the color space. Similarly, the correlated color temperature value obtained is only the average color temperature of the light space. This color space distribution is bound to affect our accurate judgment of the true color consistency of the items. 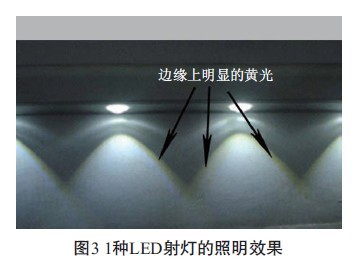 Although the development of LED is very good, it must be considered for human health, vision and biological effects. In particular, excessive blue light is used for indoor lighting, which has a series of effects on human physiology, psychology and optic nerve. This conclusion has long been accepted by lighting technology and photobiologists.

Lighting, from the current research results, can produce three kinds of effects: First, the visual effect, let us know the world with lightness and color, perceive surrounding objects to facilitate analysis and judgment; second, psychological effects, also brightness and chromaticity It can make people feel light and heavy, far and near, warm and cold, and likes and dislikes. At the same time, different shades of light also affect our mood. Third, biological effects can control our biological clock. This is why winter wakes up later and summer gets up earlier. reason. In terms of the photobiological effects of visible light, the number of blue light is the largest. The most common consensus is that when there is a strong blue light, people have no desire to sleep; on the contrary, when the blue light is weak, it is good for human sleep. The peak wavelength of blue light radiation has a large overlap with the retinal blue light damage characteristic curve and the human non-visual sensitivity curve. Therefore, when white LEDs are used indoors, some people worry that they will damage the retina and disturb the biological clock.

2.2 Blu-ray is a melatonin inhibitor

Melatonin is an amine hormone secreted by the pinealoid-sized "pineal body" deep in the human brain. It was previously called "pine pine voxel". Melatonin is the strongest endogenous free radical scavenger ever discovered. It is involved in the antioxidant system and prevents oxidative damage in cells. In this respect, it works more than all known in vivo substances. Recent research has shown that melatonin is the endocrine commander, which controls the activity of various endocrine glands in the body. The main effects of melatonin are as follows:

(1) Protect cells from disease. Because melatonin easily enters cells, it can serve as a task to protect nuclear DNA. If the DNA is damaged, it can cause cancer.

(2) The secretion of melatonin is circadian rhythm. After nightfall, the light stimulation is weakened, the enzyme activity of melatonin in the pineal gland is enhanced, and the secretion level of melatonin in the body is correspondingly increased, reaching a peak at 2 to 3 in the morning. The level of melatonin at night directly affects the quality of sleep. With age, the pineal gland shrinks until it becomes calcified, causing the rhythm of the circadian clock to weaken or disappear. Especially after the age of 35, the melatonin secreted by the body is obviously reduced, and the average is 10% to 15% every 10 years, leading to sleep. Disorders and a series of dysfunctions. Decreased melatonin levels and reduced sleep are one of the important signs of human brain aging.

Due to the inhibition of melatonin by a large amount of blue light in white LEDs, it is apparent that it will have an adverse effect on health.